Cournot and Bertrand models of oligopoly are standard topics found on many modules in microeconomics. The topics are traditionally taught using both graphical and algebraic derivations of reaction functions in order to determine the Nash equilibrium. The students at Coventry were taught in this way with a traditional ‘slide and talk’ style of lecture. Unfortunately the results from test and examination questions on this topic were very disappointing. Feedback from students suggested that they became so occupied with the technical and theoretical nature of the topic that they failed to appreciate the applicability of the model.

In order to encourage a more active learning environment a number of games and experiments were introduced onto a microeconomics module at Coventry University. This was supported by the Economics Network as a Learning and Teaching Development project. Initially most of the games were hand-run, reflecting the experience of the instructor. A paper based version of a Cournot oligopoly game was used which was based on a paper by Voola and Giles (2006). However the logistical demands placed on the instructor of running multiple oligopoly markets in the classroom were considerable. Feedback from the students suggested that they had found it the least useful game that year. For this reason a computerised version of the oligopoly game was introduced onto the module the following year.

The Bertrand experiment was used from the FEELE website. This website contains a total of 14 games and was developed as part of a FDTL project. One great advantage of using this website is that it closely follows the format of the Veconlab site developed by Holt. This makes it very easy to use. Before running an experiment, new users have to register in order to obtain a username and password. This is a very straightforward process.

The website has a number of key features which are very helpful for new users with limited or no experience of using computerised games in their teaching:

Before starting an experiment the user must configure the session. Once again this is very straightforward. The user must record the number of students who will participate and the number of players in each Bertrand market. For example a group of 30 students could be split into 10 Bertrand markets with 3 participants in each market or 6 markets with 5 participants in each market. The default setting for the market demand curve in each market is P = 15 - Q and the marginal cost for each firm is set at £3.00. These can both be easily changed if the user wants to adapt the game to a particular example.

One potential drawback of using computerised games is that the students can become easily distracted by the temptation of checking their e-mail or Facebook accounts. This certainly was an issue the first time the experiment was run. However, both FEELE and Veconlab can now be run in Kiosk mode. This effectively locks the computers and prevents the students from using them for anything but the experiment (see Feele Kiosk Mode). My recent experience of running the game in Kiosk mode was very successful and seemed very effective at overcoming the distraction problem. A final and very useful feature is that the results from the game can be easily downloaded into Word documents or PowerPoint slides. Results from the Bertrand game played using the FEELE website in Kiosk mode are shown below. 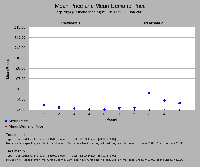 In treatment 1, the initial five rounds of the game, each Bertrand market had 3 players. The blue dot is the average price offered by all the students. The red dot is the price that cleared the market i.e. the lowest price offered. The market price very quickly fell to the equilibrium level of £3.00. By playing the game the students really get to experience the incentives in a Bertrand market. In the second session each market had 5 players. In round 3 of the second treatment I allowed the students to communicate with each other to see if any price fixing arrangements would be agreed. The difference between the average price offered and mean market price are interesting and to be expected!! These last three rounds caused a huge amount of discussion amongst the students after the game had finished.

In summary, the website provides a cheap and effective way of developing a more active learning environment. The feedback from the students was very positive and their understanding of the Cournot and Bertrand Oligopoly models appeared to improve.