Wikimedia is a charitable project aiming to freely share the sum of human knowledge with everyone in the world. Its most famous output is Wikipedia, the free multilingual encyclopedia.

Wikipedia is well-known to lecturers as the top site from which students plagiarise essay material, but it could be a platform for teaching critical thinking, if only readers would look “under the bonnet” at the process.

This article looks at the economics content on Wikipedia and its sister projects, at issues of quality in Wikipedia, and at new developments which will ease the free sharing of economic knowledge.

As an encyclopedia, Wikipedia has a highly constrained style. Other Wikimedia projects are less constrained, holding questions, worksheets, or primary texts. 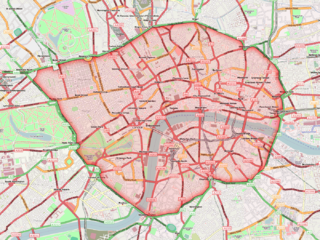 Map of the London congestion charge zone: one of many millions of images shared freely through Wikimedia. Created 2008 by ed g2s; Creative Commons-Attribution-ShareAlike

​Wikibooks allows more textbook-like material, and more prominent author credits than Wikipedia. A group of economics lecturers in the US shared papers and lecture notes to create a textbook on Fundamentals of Transportation.

Wikiversity allows users to post original research. The FEELE lab at the University of Exeter used the site to create an online handbook for Economic Classroom Experiments. Like the transportation wikibook, this was showcased as a “featured resource” by the wiki community.

Wikisource is a project to create definitive electronic versions of out-of-copyright texts. It includes texts by, and about, 100 economists from Adam Smith to Alan Greenspan.

Wikiproject Economics is a noticeboard for anyone interested in improving Wikipedia’s articles on the topic. It lists just under ten thousand articles as relevant to economics. The topics include concepts, economists, specific economies, schools of thought, or events.

The Wikiproject also tracks the most popular Economics articles. The top 135 articles each get at least a thousand hits per day.

Looking under the bonnet

By looking beyond the current version of the page, students can see how articles are not “fixed in black and white”.

Wikipedia has faults, but its open publication process puts them on public display. By looking beyond the current version of the page, students can see how articles are not “fixed in black and white” but emerge from an ongoing dialogue.

Each change to Wikipedia is recorded. The “View History” button at the top of a page reveals previous versions of that page, starting with the most recent. As I write this, there have been more than 80 changes to the Economics article in the past six months, some of which added or removed large chunks of text.

Each article has a Talk page for proposing improvements. For controversial articles such as Economics, the Talk page discussion is many, many times bigger than the article itself.

The Talk page reveals the debates and clashes that shape the article. For example, on Economics, one user’s plea that Austrian Economics is the only true economics is rebuffed by other users reminding him that Wikipedia aims for a balanced summary of mainstream academic sources, not users’ opinions.

Since every article is a work in progress, quality is not indicated by publication but by a rating posted on the Talk page. To badge an article as “Good” or “Featured”, there are formal review processes bringing in uninvolved editors.

Since facts change and quality standards change, articles can drop down the quality scale even without changing. An example is London Congestion Charge: over several reviews (click "Article milestones") it has been promoted to Featured Article, demoted, and denied a Good Article rating.

These changes also mean that readers should be wary of old reviews. For example, United Kingdom corporation tax still has a Featured Article rating from 2007 but does not reflect changes since then.

Only 80 economics-related articles are at Good Article or higher. It is hard for articles about abstract concepts to reach a high quality, because it is hard to agree the totality of sources to draw on to be truly global and balanced. Economics is a case in point, mired in arguments about the scope of the article or the weighting given to different sections.

Articles about specific events fare better, drawing on a more clearly defined literature. The Featured Articles in economics, including Panic of 1907 and Wage Reform in the Soviet Union, 1956–62, reflect this.

Wikipedia articles often highlight facts and figures: several dozen of them in an article like Economy of India. Some consist of tables of numerical information, such as List of minimum wages by country. 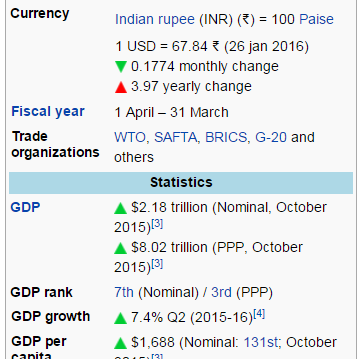 At the moment these figures are updated manually. It would be better to draw them from a central database. That is the goal of Wikidata, which makes many millions of facts and figures available for use on Wikipedia or anywhere else. Gradually, economic indicators such as Gini coefficients are being added to Wikidata, eventually to appear automatically in Wikipedia.

Graphs, like other images in Wikipedia, are created with external software then uploaded and embedded in articles. For example, the ONS have uploaded many of their infographics. Updating graphs is a cumbersome process, but a new software extension creates simple graphs and charts from tables of data. Updating or correcting the graph will just require editing its data table.

The most interesting new development is the increasing proportion of articles written by students for course credit. Often these are in social science topics, like Individual Development Account or Overurbanization. With proper planning and support, this is an opportunity for students to have their work reach a huge audience.

Even the process of adding a single, properly cited fact to Wikipedia is an exercise in high-level judgements about knowledge and reliability. Though the site is a long way from being comprehensive and reliable for Economics, and only at best a starting point, it’s as a tool and a community that it has an educational use.

If you have any questions on this article or would like to know more about Wikipedia, please feel free to contact Martin.