Reconsidering the Teaching of Economics to Students on Business Programmes

Teaching economics to students on business programmes can be quite challenging. In part this stems from the fact that economics teaching appears to have levels of abstraction whereas other modules such as marketing, finance and human resource management are seen as practical modules that relate to functions that businesses actually carry out every day. Problems may also arise due to skills differences between students on business programmes and those on economics programmes.

The teaching of economics has been compounded at the University by large class sizes which have been as high as 900 in one first year cohort. With such numbers, the lecture method has remained the most commonly used way of delivering learning. In the past few years, these traditional lectures have been interspersed with student activities, so that a workshop type of teaching has been used. This, however has not improved student results significantly.

The failure rates on introductory economics programmes have traditionally been higher amongst non-economics students relative to economics students within the university. The project was centred on redesigning the delivery of microeconomics to business students and marketing students in a way that helps them see economics as a practical module, in a sense similar to the way they see principles of marketing for example.

Several aspects of learning were incorporated into redesigning the module. The ideas behind the redesign were based on informal discussion with my students in previous years and identifying what they found difficult about understanding economics. The main areas addressed included

With these issues in mind, the module was redesigned around the pedagogy of threshold concepts and inquiry based learning. Threshold concepts help in addressing the problem of the crowded curriculum. The use of threshold concepts suggests that instructors avoid teaching to the textbook, which is the most common way of delivering learning. A core text book is selected prior to the start of the module and a select number of essential topics are covered; students are expected to widen their learning by referring to the textbook after the lectures. In some cases, more resources are provided via the university VLE.

The use of threshold concepts is rather radical in the sense that we move away from this planned standard type delivery of what are seen as basic principles in economics to teaching only those concepts that are seen as core to the subject. The literature suggests that once learnt, these concepts are often irreversible so that learners are unlikely to forget them. It therefore seems to be a very good way of developing understanding of a subject that otherwise is perceived as difficult for the students.

The selection of threshold concepts was difficult. It was decided that the best way to select topics would be to consider what the students would be expected to apply their knowledge of economics to. To this end, technical details were minimised and used only when they aided the understanding of the concept. The concepts selected were

The second pedagogical concept relied upon was Inquiry Based Learning (IBL). The foundation of IBL is that involving the students in the learning process leads to deeper level learning and hence understanding. This way of learning, though natural (we go through life finding out about things) seems to be unnatural once students get into the learning environment. Traditional teaching has so often focused on memorising facts that learning by inquiry can initially prove challenging for both instructor and student.

The use of inquiry based learning in the module was an attempt to deal with the disconnect that students often see between practical business and economics. To facilitate the learning process, students were allocated firms on which to base their understanding.

To further address the disconnect problem, oral presentations were incorporated as part of module activities and assessment. Because of the large class size, group work was the preferred mode.

About 45 percent of the class engaged with the wiki idea of collecting information. Eventually the engagement increased to about 70%. The engagement improvement seemed to correlate with the times close to the formal feedback dates. It is possible therefore that rapid increase in engagement was assessment driven. The engagement with the online sites was about 45%. However, those who did not use their specific group sites used the open discussion sites. The appendix shows screen captures from both examples.

The engagement with poster presentations was very good. Focus group discussions were also conducted in the seminar groups to get feedback on student experience. The following are highlighted as challenges identified by both the teaching team and the students. 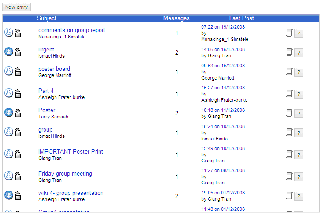