Moving to online teaching for a final year module

This case study outlines some of the innovative features I have incorporated (in response to the pandemic) in the final year optional module, Economics of Public Policy in Autumn 2020. This module is primarily aimed to equip students with various tools of analysis and skills that can be applied to selected theoretical and applied problems in the economics of public goods, fiscal federalism, externalities and taxation, as well as in some aspects of political economy. A series of bespoke pre-recorded materials with live sessions that encouraged advance preparation and peer learning enabled me to deliver successfully on the challenging and new environment in which we had to deliver our modules.

I have been teaching the Economics of Public Policy module since Autumn 2018. However, the onset of the pandemic necessitated restructuring the delivery of the module by breaking down the contents into short, asynchronous (pre-recorded) videos, synchronous lectures (with considerable emphasis on the interactive element), changing the assessment methods and overhauling the structure of the Moodle page (virtual learning space) of the module. The class size was large (186), and the students varied widely in their preferences and skills.

My first aim was to create a user-friendly Moodle page so as to ensure that students have a complete overview regarding the structure of the module. I created a table where topics covered in the module were listed by week, as well as the relevant (bi-weekly) tutorials for the weeks. The table also had links to view the pre-recorded contents and live session recordings for each topic. This meant that students could access all the relevant material from the table itself (Figure 1 below), and would know the order in which they were expected to access the various materials. In addition to this, the Moodle page also had separate sections on the assessments. Another important feature of the Moodle page was the organisation of forums for discussions according to topics and each of the 4 tutorials. To acquaint the students with the Moodle page, I created an overview video for the module, highlighting the topics that the module would cover, navigation of the Moodle page, the changes in the assessment structure and also the etiquette students were expected to follow in the live sessions. 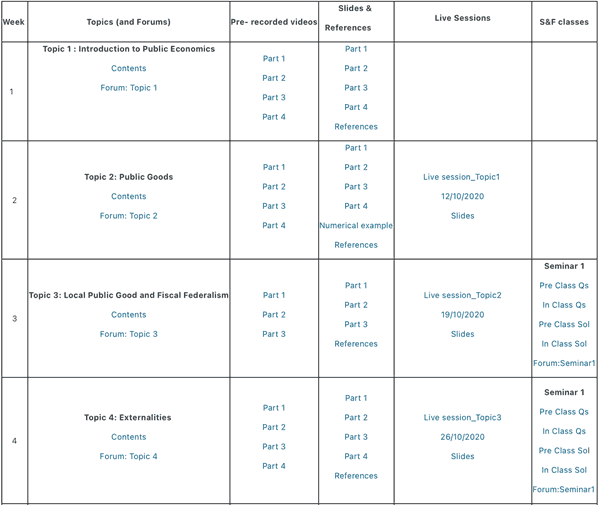 One of the challenges in the current blended learning approach is to create an appropriate break down of the content for each topic, into what is covered via pre-recorded material and what is best addressed in a live session. I followed a strategy whereby most of the technical aspects of the module was covered in the pre-recorded videos, while the live sessions were focussed more on discussions, questions-answers and overall understanding of the topic. Every year, I try to incorporate at least one new topic which is more relevant to the current global scenario. This year, I incorporated two new topics, while cutting down on the technical aspects of some other topics. These were the economics of climate change as an application of the topic on externalities and a new topic on the economics of Covid-19.

During the term, I posted the pre-recorded videos (approximately 3-4 videos of 15-20 minutes each on average) a week before the live session on the topic, with the guideline that students should review the materials and put forward any questions they may have, in the relevant forum for the topic by the end of the week. I would then collate the questions to answer in the live session. Apart from incentivising students to read in advance and view queries that other students had, another advantage of the forums was that students could also answer each other’s questions without my intervention. Hence, it also served as a platform for peer learning.

I recorded the videos using OBS (freely available software for video recording). In this platform, one can customize the presentation of the screen which can comprise of more than one input source (called “source” in OBS). For each “source”, one can choose to capture their computer window, tablet screen or camera and position as well as adjust the size of the “sources” relative to each other. I used the iPad as one of the “sources”, with the other “source” being my computer camera. I kept the slides open on the iPad which enabled me to write on the screen that the students could see, using a stylus, as I went along in the lecture video.

If there would be no response for a question, then I used to break-down the question into simpler steps, and would seek responses for each of these steps

I started the live sessions on MS Teams with a structured presentation which provided students with an overview of the material covered in the topic, delving into more detail on aspects students may have found difficult. Again, I used the iPad as one of the screens with the slides, which enabled me to write and explain in real-time during the session. I also ensured that every live session had an interactive aspect so as to enhance student engagement. For example, in the introductory class we played the Common Property Resource game using the ClassEx platform. I displayed the QR code to the students for scanning so they could log in to the game (alternatively, they could have logged in using a password which I mentioned in the class) and once they were logged in, I showed the instructions of the game, following which I started the game. The game comprised 6 rounds with each round having 2 stages. I provided 15 seconds to them for each stage, after which I proceeded to the next. At the end of the game, I displayed the screen with the graphical results and students then engaged in a lively discussion of the outcome of the game. This proved interesting because they eventually covered the theory behind the concept in the topic on externalities. In most of the other sessions, interactive activities involved solving multiple choice questions using Vevox or MS Forms. I preferred Vevox as it provided a more formal interface and is easy to implement.

I also modified the assessment structure of the module to ensure student engagement in the module as well as to prepare them for their future professional life. In the previous years, it included a 20% coursework (where the students could choose between a more analytical question and an essay question) and 80% final examination. This year, I modified it to a 10% midterm multiple choice test, a 20% group-based policy brief coursework and 70% final examination. Practising multiple choice questions in a limited period of time during the live session helped students get acquainted with the format of the midterm test.

The group policy brief coursework was designed keeping a couple of things in mind. First, it would enable students to develop the skills to convey important policy-oriented topics to a non-economics audience. They were asked to pose as a panel of advisors to the government of any country of their choice and write a report on any one of the broad areas of the recent Covid-19 pandemic, climate change or education. Secondly, undertaking group work would provide them with an opportunity to develop their skills for the world of work, because most workplace situations involve working in teams at least to some degree. They were given the independence to choose any topic from one of these broad areas and corresponding to any country. This enabled groups to explore areas where they are most interested in and provided them with a challenge to communicate their understanding of a topic in a non-technical way. Additionally, it also enhanced peer learning.

The student evaluations for the module were extremely positive, with students enjoying the interactive nature of the live sessions involving the multiple-choice polls and games. Most of the students would participate in the live sessions, unmuting themselves to ask questions, rather than just typing in the chat box which helped augment the interactive element in the sessions. This enabled them to gain in confidence on how to interact in online sessions while maintaining necessary etiquette. Students have also stated that they have particularly enjoyed the contemporary topics related to climate change and Covid-19, and that it has helped them to see how economic concepts can be meaningfully applied to contemporary global challenges. Students also appreciated the pre-recorded content, particularly commending the manner in which the more technical aspects were covered using the iPad, thus helping them understand important steps of the derivations.

The main challenge was to keep the students engaged, especially in the live sessions. Initially only a couple of students were speaking and answering most questions, but I continued to stress the importance of students’ participation in these sessions. On some occasions, if there would be no response for a question, then I used to break-down the question into simpler steps, and would seek responses for each of these steps. This made the students realise that their participation constitutes a predominant part of their learning rather than me dictating things. Hence, over the course of the module, more students managed to open up which was encouraging. It was also challenging to make the pre-recorded sessions engaging, which was achieved through each recording being short and including step by step derivations that students could replicate.

Overall, teaching the module has been an enjoyable and enriching experience, giving me the opportunity to explore new and interesting ways to learn and teach.