Gender bias in the economics profession

This page will be regularly updated with links to the ongoing debate about gender gaps in economics (staff and students), most recent at the top.

To recommend an article, blog post, or video for inclusion, email m.l.poulter@bris.ac.uk

Discover Economics is a three-year campaign, supported by a wide range of economics organisations, to

Take a look at the new web site and its case studies, and please tell your colleagues about it, or consider contributing.

September 2021
Does economics have a problem with women?, Tim Harford

Not only do women comprise only a quarter of academic economists, they are also more likely to be employed at lower rather than higher academic ranks, in research-only and teaching-only positions—instead of more traditional posts that combine both teaching and research—and on fixed-term contracts. Moreover, progress in closing the gender gap appears to be stalling in some areas, and, at both the student level and at the level of female minority academics, there are some signs of retreat.

May 2021
Women in Academic Economics: Have We Made Progress? by Donna K. Ginther and Shulamit Kahn in AEA Papers and Proceedings

We found that women in economics were 15 percent less likely to be promoted to associate professor after controlling for cumulative publications, citations, grants, and grant dollars. In contrast, we found no significant gender differences in promotion in other fields including biomedical science, physical science, political science, mathematics and statistics, and engineering.

November 2020
Not for want of trying: Effort and Success of women in principles of microeconomics, Lester Hadsell in International Review of Economics Education

Prior research suggests that women enter their first college-level economics class with lower expectations of success while also thinking they must work harder than men to earn similar grades. [...] Women with a B+ (just shy of an A-) before the final exam are more likely to choose to submit an optional final compared to similar men.

July 2020
Gender and equality at top economics journals, summary of research by Erin Hengel and Eunyoung Moon in the RES Newsletter

We [need] to raise awareness among students, academics, and employers in the private and public sector of the importance of diversity in economics, as this would benefit all and not just women.

A profession that is less diverse and less open to different identities is more likely to exhibit groupthink and hubris. If it is to generate ideas to help society achieve inclusive prosperity, it will have to start by becoming more inclusive itself.

January 2020
A Year After a #MeToo Reckoning, Economists Still Grapple With It, New York Times

An exhaustive study of economics seminars, presented by Alicia Sasser Modestino of Northeastern University on behalf of several co-authors, found that female economists face far more questions from men in the audience during their presentations than male economists do. "In general," Ms. Modestino told a largely packed room for a session on gender in economics, "women are more likely to receive questions that are not fair."

The pay gap between male and female economists at UK universities has not fallen for 20 years, a new study has revealed. [...] The total “unexplained” pay gap is substantial at 12.7%. Half of it is from lack of promotion and half of it is from male professors earning more than females, the study revealed. [...] The study also reveals that men are 11% more likely than women to be promoted to Professor, and amongst Professors men earn 11% more than women.

March 2019
Why are there so few women in economics and what can be done about it? Policy Matters podcast, 35 minutes

"Awareness of implicit bias - unconscious bias - is really the only way to address it. It's clear that the problem is not equally recognised by men and by women." - Prof. Sarah Smith, head of the Royal Economics Society’s Women’s Committee

February 2019
The way to fix bias in economics is to recruit more women by Mohsen Javdani, FT

Ideological biases make the economics profession ill-equipped to engage in balanced debates regarding politically controversial economic issues that characterise our time, such as inequality, austerity and climate change. We found female economists exhibit less ideological bias to begin with and were able to set their biases aside when dealing with an issue that they had personally experienced.

The core explanation of the determination of wages in the typical economics classroom centers on the idea that your salary equals some objective measure of your actual contribution[.] [W]ho among the members of an introductory-level economics class is this likely to attract? For whom is “you get what you deserve” likely to strike a chord?

Leading male economists offered an unprecedented acknowledgment of harassment and discrimination in the field. "Economics certainly has a problem," Ben Bernanke [...] said during a panel discussion. The profession has, "unfortunately, a reputation for hostility toward women and minorities," he said.

We propose that differential assessment of men and women is one important factor in explaining women’s failure to advance in economics, reflected in gendered institutional policies and apparent implicit bias in promotion and tenure processes.

Although there is no explicit way to know whether the gender imbalance is negatively affecting the field of economics, a 2013 survey of American economists showed that women were more likely than men to support higher minimum wages, regulations, and redistribution (“Women and economics”). This survey demonstrates that women, on average, have different opinions than men.

Only one woman has been awarded the Nobel Prize for economics, and the number of women to have led the academic profession on either side of the Atlantic can easily be counted on one hand. But this male-dominated world is changing.

June 2018
"What is the RES Women's Committee?" Sarah Smith of the University of Bristol explains the problem and what the Committee is doing.

May 2018
Economics has a gender problem—and it starts at school by Sarah Smith, Prospect

Economics students are predominantly male and more likely to come from a private school than the average student. STEM subjects have made huge strides in improving their appeal to women and now have a 52 per cent female share at undergraduate level. Economics stands at less than one-third and, if anything, the trend is going in the opposite direction.

More than 70 percent of U.K. students accepted to study the subject at undergraduate level in 2015 were male, data compiled by the University of Bristol’s Economics Network show.

April 2018
Where are all the female economists? by Gemma Tetlow, Financial Times

Women are far less likely than men to study economics, [...] [W]hile other traditionally male subjects such as engineering have made progress in attracting women, economics has struggled.

Repeated studies are demonstrating that evaluation scores are biased in favor of white, cisgender men. [U]ntil we’ve found a way to measure teaching effectiveness that isn’t biased against women, we simply cannot use teaching evaluations in any employment decisions in higher education.

January 2018
Gender Bias, by the Numbers Inside Higher Ed

A study of leading introductory economics textbooks, presented at the annual meeting of the American Economic Association, found that three-quarters of the people mentioned in the books (77 percent), real or imagined, are male. [...] [W]hen these textbooks do mention women [...], they’re more likely to be involved in food, fashion or household tasks. Men are more likely to be appear in relation to business or policy.

Paper after paper presented at the American Economic Association panel showed a pattern of gender discrimination, beginning with barriers women face in choosing to study economics and extending through the life cycle of their careers, including securing job opportunities, writing research papers, gaining access to top publications and earning proper credit for published work.

October 2017
Where are all the women in economics? by Kim Gittleson, BBC Business. Summary of recent debates

We hear a lot about the under-representation of women in so-called STEM fields - science, technology, engineering and maths. But the proportion of women in economics is by some measures smaller. In the US, only about 13% of academic economists in permanent posts are women; in the UK the proportion is only slightly better at 15.5%.

With more than one million posts on the Economics Job Market Rumors forum over two years, I identify gender-related posts [...] Words with the strongest association with female are mostly inappropriate, and the occurrence of these words in a forum that was meant to be academic and professional exposes the issues of explicit biases in social media.

April 2017
Economics papers by women are stalled longer at journals – but they end up more readable and more improved: Press release from Royal Economic Society about Erin Hengel (University of Liverpool)'s research on bias in peer review

The only straightforward explanation consistent with the data, however, is that referees apply higher standards to women’s writing. [...] Tougher standards applied more broadly reduce women’s output; ignoring them undervalues female labour and may confound estimates of gender discrimination.

Women account for a 28% of all academic staff in UK economics departments. Women are under-represented among Professors; one in three men are Professors, compared to one in seven women. 20% of men and women have part-time employment in the sector; men are more often found in senior positions than women.

See past publications from the RES Women's Committee on the RES site.

November 2014
More on the gender gap in economics

[T]his evidence would suggest that economics is improving as a place to be for women although — of course — other disciplines may be improving faster. [...] [W]e have little knowledge of what is happening to discourage girls from enrolling in economics at secondary school and in undergraduate degrees at universities. 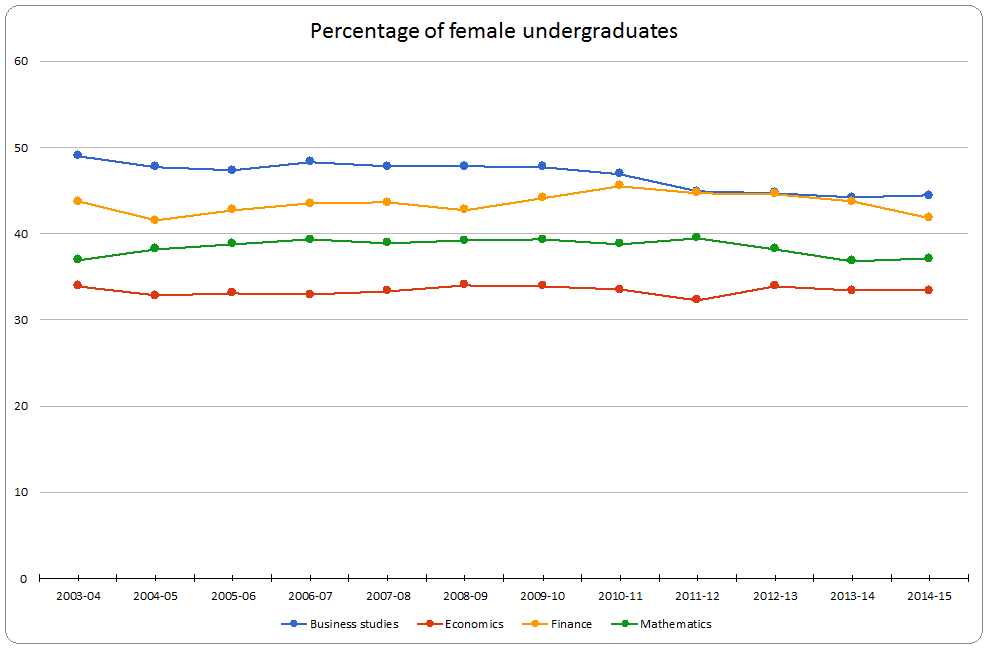 Gender of recipients of economics awards 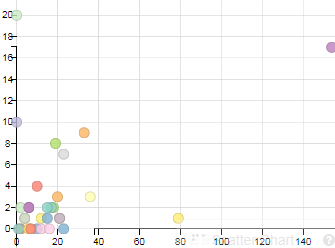 Powered by Wikidata. Warning: data for more notable awards will be complete, but more obscure or early-career awards will have gaps because some recipients are not notable.