An abridged version of this case study was previously published in Economics Network Newsletter, Issue 17

The overall aim of the project was to assess the potential of blended learning to aid the improvement of the learning process experienced by widening participation students who had been motivated to enrol on a BSc in Business Management Degree Programme at Canterbury Christ Church University, Broadstairs Campus, and were required to take the Introduction to Economics and Statistics Module as part of their first year undergraduate programme.

“Widening Participation is central to the Mission of the University which is ‘to pursue excellence in academic and professional higher education thereby enriching both individuals and society’. This focus includes a commitment to enabling suitably qualified individuals to access the potential benefits and rewards of higher education and to fulfil their potential whatever their background.” (Canterbury Christ Church University online, 2010, p.4)[1]

Part of the widening participation strategy of Canterbury Christ Church University is the development of Broadstairs Campus.  This is a satellite campus based in the regionally, economically deprived area of the Isle of Thanet.  For the purpose of this project widening participation was defined as a desire “to increase the representation of those groups that are currently under-represented in higher education or in particular aspects of higher education (e.g. males in primary education or nursing).  It includes a focus on students and their families from lower-socio-economic groups (NS SEC 4, 5, 6 and 7), from low income groups, those from areas of low participating neighbourhoods, disabled students, students leaving care, part-time and mature students; and some students from minority ethnic communities.” (Canterbury Christ Church University online, 2010, p.1)1  This is particularly relevant to the regional location of Broadstairs Campus, which is the Isle of Thanet because it would be considered to be a low participating neighbourhood.  12.4% of people living in the Margate District have qualifications at degree level or higher and in the Broadstairs District 16.4% have qualifications at degree level or higher, while in Canterbury, which is only 22 miles from the Isle of Thanet, 28.8% of people have qualifications at degree level or higher[2].

The module recruits from a non-traditional student base driven by the University Widening Participation Strategy1.  Given the widening participation context, key challenges are support and guidance (both assessments) and time and travel for with regard to the group assignment.

Introduction to Economics and Statistics is a compulsory 20 credit module taken by all first year undergraduate students studying for a BSc in Business Management.  The module aims to introduce students to basic statistical techniques which are relevant to the modern day economist.  It will also enable students to acquire a knowledge and understanding of the fundamental economic concepts of microeconomics and macroeconomics. The module was assessed by a group essay which discussed the impact of the credit crunch on a region; and an hour time constrained assignment of thirty objective test questions regarding everything studied in the module.  Both assessments had a weighting of 50% for the overall performance awarded for the module.

Modern economic textbooks: Begg et al. (2008)[3] and Sloman and Hinde (2006)[4] offer blended learning to engage students to obtain a more thorough understanding of the different economic concepts.  For the previous cohort 2009/10, the core textbook Begg et al. (2008)3 online learning site was chosen to support students with regard to the time constrained assignment.

Three objectives were identified to explore the potential for “blended learning” approaches to enhance the students’ assessment experience, specifically in the areas of guidance and flexibility for the two assessments.

The first two activities were regarding the production of the audio slides and the availability of WIMBA (a web-based videoconferencing and collaboration system) covered the first objective with regard to the introduction of the new blended learning approaches in support of the two module assessments. The third activity focused on the second and third objectives which were designed to evaluate the impact of the introduction of the two new approaches on the assessment performance and group dynamics and cohesiveness between 2009/10 and 2010/11 cohorts, and the evaluation of 2010/11 cohort students’ perceptions, attitudes and satisfaction towards the new and existing approaches with regard to the introduction of audio slides and WIMBA and the continuation of the online test questions. Therefore, the third activity evaluated the impact of new and existing blended learning approaches in support of the assessments by comparing cohort assessment performances and by surveying students.

There were 42 students in the 2009/10 cohort and 45 students in the 2010/11 cohort who studied the Introduction to Economics and Statistics Module. The methodology applied was a combination of quantitative and qualitative data gathered. The quantitative data was gathered from surveys completed by both cohorts, mapping of the movement of the group dynamics in each year, and the performance of the two cohorts through the assessments. Qualitative data was determined through interviews with students during seminar activities and individual tutorials. In order to make a valid comparison of the performance, both assessments were identical for the two cohorts.

It was argued that the quality of the production of the audio slides could be improved at the cost of a larger file. Therefore the scope for investigating the balance between sound quality and file size needed to be evaluated in the future. The overall attitude and opinions of the 2010/11 cohort were positive with regard to audio slides. Also, both cohorts agreed that the online test questions and feedback provided support for the time constrained assignment. However, the research highlighted that it could not be argued that audio slides replaced face to face guidance for assessment preparation by recording guidance in audio slides.  Instead, the research suggested that audio slides complemented tutorials as discussion could be focused around the audio slides rather than replacing tutor-led support for both assignments. Also, the Higher Education Academy IMPALA[5] project found students valued the use of audio slides for revision. The opinions of the 2010/11 cohort agreed with this Project’s5 findings.  However a comparison of marks between the 2009/10 cohort and the 2010/11 cohort identified there was no actual variation of marks. (See Table 1)  Also the chi-squared statistically demonstrated there was no deviation of the degree award categories between the two cohorts with regard to the time constrained assignment. (See Chart: Performance for TCA and Appendix 1) Thus it could be argued that the 2010/11 cohort only perceived audio slides and online test questions did improve the learning process they experienced, but the new blended learning approach did not impact on the actual marks they achieved compared to the 2009/10 cohort. 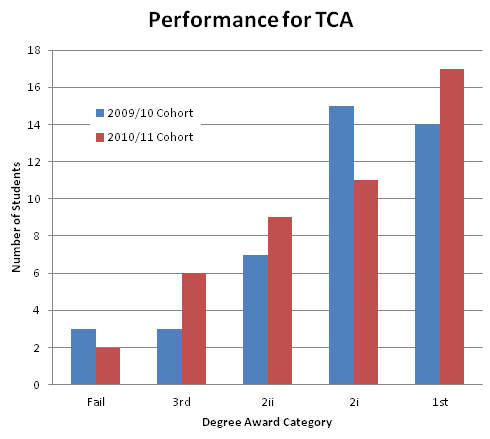 The implementation of WIMBA (a web-based videoconferencing and collaboration system) proved very complex and time-consuming, even though only three groups had originally signed up to use WIMBA.  It could be argued that the strength of integrating WIMBA with Blackboard VLE is in needing only a Blackboard login and not having to learn how to login to a new system on a different web site.  However, without a facility through Blackboard VLE to create private, student-led group rooms this approach is impractical.

There was initial interest in using WIMBA by three groups for the group essay. However, none of the 3 groups actually followed through and used WIMBA, because they had not chosen to attend the training session offered in December 2010.  Thus this resulted in the students not effectively using WIMBA.  The students stated they were unable to properly access the group WIMBA classroom for collaborative assignment work. It could be argued that the research illustrated that WIMBA is not designed for student-led use in group assessment work.

A comparison of the assessment performance of the 2010/11 cohort to the 2009/10 cohort with regard to the group essay demonstrated a significant variation of marks awarded with regard to the average mark, which varied by 14.67%, and the standard deviation, which varied by 4.21%. (See Table 2)  The chi- squared statistically demonstrated there was a deviation of the degree award categories between the two cohorts with regard to the group essay assignment (See Chart: Performance for Group Essay and Appendix 2).  Thus, it could be argued that the research identified the students for 2010/11 cohort needed to further develop their management skills before being able to successfully apply WIMBA, but they appreciated the potential of the new blended learning approach. 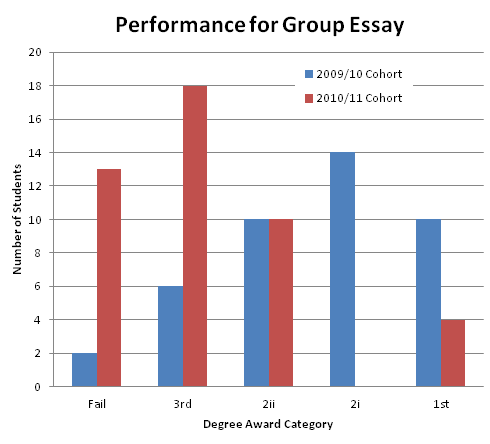 Table 3: Marks for the Module 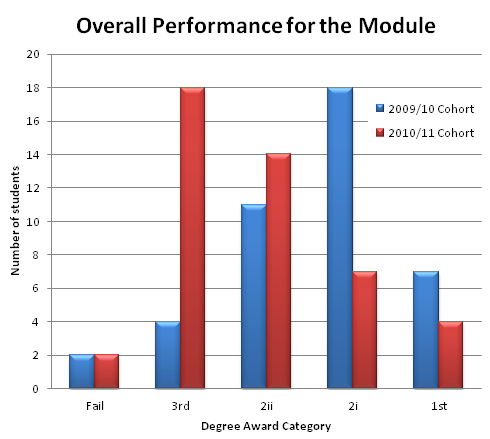 Thus, overall it could be argued that the research identified that 2010/11 cohort perceived that audio slides did make a positive contribution to their understanding of the module.  However, this perception was not reflected in their overall grades, which on average were 7.33% lower than the 2009/10 cohort.  Also, the students stated a preference for face –to-face communication with regard to the group essay.  Those students who did use online forms of communication in their groups preferred to apply familiar external technologies i.e. a mobile phone and Facebook.  However, a more structured tutor-led WIMBA would be considered by the students in their future studies.  Thus, it could be argued that there was no overall quantifiable impact of the new blended learning approaches to the actual performance for the 2010/11 cohort with regard to the two assessments.  However, the students’ perceptions of the new blended learning approaches were positive and therefore could be argued to have enhanced the students’ assessment experience.

H0: There is no association between the cohort and the degree award categories

H1: There is an association between the cohort and the degree award categories

With 4 degrees of freedom the critical value is 9.488

Therefore accept H0.  There is no statistical association between the cohort and the degree award categories for the time constrained assignment.

H0: There is no association between the cohorts and the degree award categories

H1: There is an association between the cohorts and the degree award categories

With 4 degrees of freedom the critical value is 9.488

Therefore reject H0 and accept H1.  There is a statistical association between the cohort and the degree award categories for the group essay.