‘How is your degree preparing your for life?’ was the question asked to students this year in the Economics Network's Student Essay Competition. Twenty-five students entered with three joint winners from LSE, University of Strathclyde and Queen Mary, University of London. The approach to answering the question varied although common themes emerged.

The figures below visualise the main themes of the essays by showing more frequently occurring words in larger text.

All of the students realised that economics prepared them very well for the workplace. The majority of students stressed that as a result of choosing an economics degree their horizons had been broadened:

“Many avenues can be opened up with an economics degree” and “[the notion of only being an accountant] is a stereotypical and naive view which is misguided and wrong”.

The importance of an economics degree for a student’s career is highlighted through all of the essays or, as one entry stated:

“Career is probably the metonym for an average student’s idea of the ‘life’ an economics degree is preparatory for.”

Students felt they were well prepared for the workplace primarily because of the transferability of their skills. One student mentioned that:

“by the end of the degree you emerge as a student who can read as well as a law graduate, compute as well as an accountant and analyse econometric data as well as a statistician.”

Although the essays regularly mention careers, only one identified money as the deciding reason to choose economics as a degree:

“Honestly speaking I chose economics as my major just because I thought it would be strongly correlated with money. However, as my time goes on ... I gradually find that economics is a perfect balanced point that bridges two opposite aspects in life: the individual and collective.”

“Studying economics because of the urge from money? No! Economics is a study of how everyone could gain happiness, money is just a medium of exchange!”

What became increasingly apparent in all of the essays is that, by studying an economics degree, students can analyse everyday actions using economic theory:

“am I only accepting bad customer service because the coffee is cheap? Would I be willing to pay more for coffee if I also got friendly customer service?” or “deciding to jump in the local river on a old January afternoon to celebrate the end of your exams is irrational behaviour”.

Many of the students realise the economic process behind decisions that affect their day to day life. The upcoming UK general election in May was one of the areas where students felt their economics degree had helped them to make informed decisions:

“I was previously of the view that public policy would not really make a difference to the population but now I find myself scrutinising Labour and Tory policy claims”.

One student commented that his economics degree had “transformed [me] into an informed voter”.

Many of the essays comment on the process of thinking, and how their economics degree has taught them to tackle issues:

“Economics will not ‘prepare’ you for life through the theories and models themselves; it is more the process you implement to understand those models that are of real importance”.

Students are aware of others around them and the implications their degree may have on others, whether this is as a result of ESD (education for sustainable development) teaching or general awareness is difficult to say. One student noted:

“I now consider the long-term effects of what I do today, the effects it will have on people associated with me, I thus have a wholesome life, one that is not only full of opportunities but if full of understanding of welfare of myself and others”. 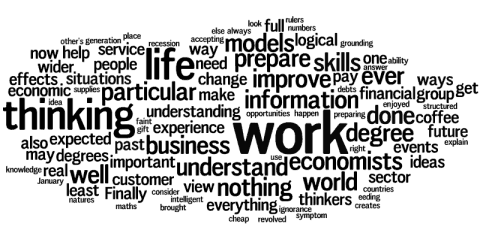 Very few of the students did not mention the economic climate at some point in their essays. Some commented on the changing of economic teaching:

“Whether a university’s economics syllabus really is one to use with today’s ever complex society, with everyone so puzzled by how the intensity of the credit crunch wasn’t predicted, everyone’s pointing the finger at economists for answers”.

The importance of putting the teaching of economics into context was apparent:

“By learning the concepts, we can then apply these to everyday situations (like the best car to buy given your budget) as well as huge global crises, or the length of time it will take for businesses to recover from the recession”.

Putting the theories into context has changed the way students think: “I am now a natural rational thinker”.

Students often felt lucky to be studying economics during the recession:

“In an odd way, I was fortunate to begin studying Economics at a time of global recession. Whilst most people were worrying about their waning job prospects, I found it absolutely fascinating to be a student at such a critical time and learn about how we got where we are today.”

The current and instant application of theories is evident:

“I can look at financial news such as the increase/ decrease in interest or CRR rates and predict the effects these may have on exchange rates”.

“Although the last few years have put a real dent in the reputation of modern macroeconomic theory, it would be foolish to say that the models we are taught are of no practical use in the real world.”

However, many remain defensive of what they are taught:

“studying economics at university has helped me to realise that with the right knowledge, we prevent a huge economic downturn from occurring in the future”.

Overall students are excited and invigorated by their economics degree:

“I am actually excited to see where I end up in the future as I have no doubt it will be doing something inspiring with the numerous skills that I’ve acquired. Even after my degree, though, I will probably still feel uncomfortable to label myself an ‘economist’ because there is such a wealth of economic theory out there and the world is constantly changing, I would never be qualified enough at all to do so. However, this is precisely why I love it; I’m constantly learning, developing and understanding and that is why I find Economics such an exciting and important subject.”

“Whether in managing my bank accounts, discussing politics down the pub, or deciding who to vote for in elections, my economics degree has prepared me to a level beyond other disciplines”.